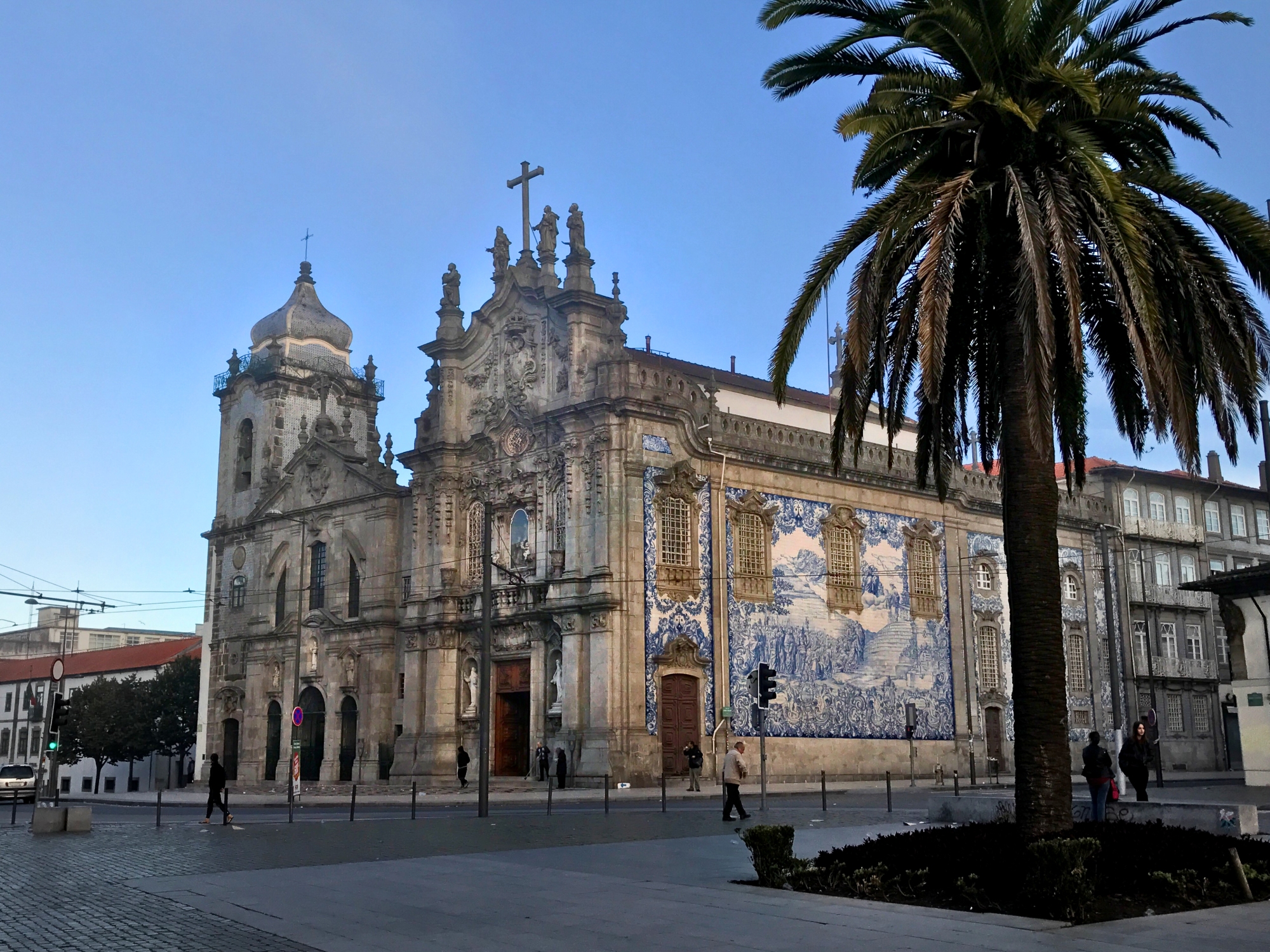 We didn’t know much about Porto when friends first invited us to join them for a long weekend in Portugal’s second largest city. Known as the home of port wine and a top gastronomic destination in Europe, we enjoyed eating and sipping our way through the city’s restaurants, cafés, and port houses. We also found ourselves captivated by the beautiful old city with its winding streets, colorful architecture, and historic buildings. With so much to offer it quickly became one of our favorite European destinations.

The bi-level Ponte Luís I Bridge 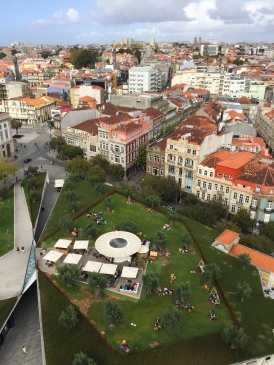 One of the city’s iconic trams 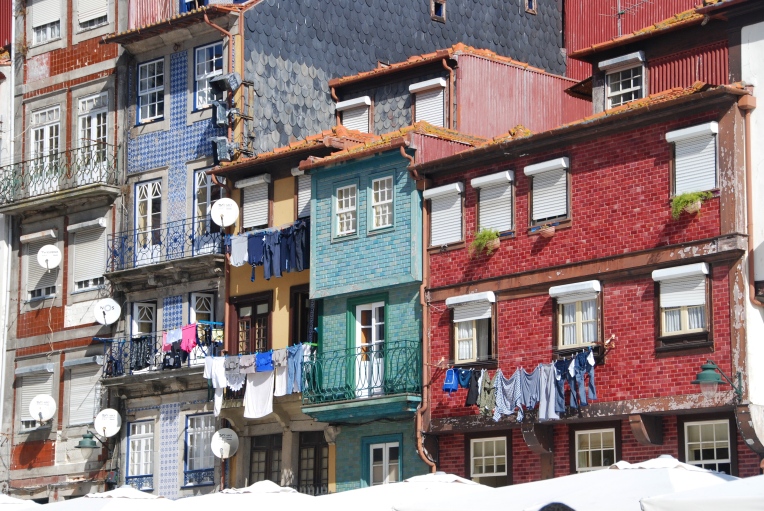 Colorful residences in the Ribeira area of Porto

Located on the northern bank of the Douro River, the city of Porto stretches up the hillside in jumble of colorful, red-roofed buildings. On the southern side of the river, the mirroring city of Vila Nova de Gaia is equally charming with historic port cellars and rabelo boats lining the shore. It worth spending time on both sides of the river—many of the finest historic sights are in the city center of Porto, a UNESCO World Heritage location, while the best port tours and tastings are found in Vila Nova de Gaia. Despite its hilly nature, the city is very walkable, and it’s easy to cross from Porto to Vila Nova de Gaia on either the upper or lower deck of the Ponte Luís I Bridge.

It’s hard to visit Porto without a visit to one (or several) of the city’s distinctive churches. Porto Cathedral, with its prominent location high above the river, is an easily recognizable landmark. Admission to the cathedral is free, and a small supplement is charged to access the cloisters. Unlike many of the other churches in the city, the interior is simple in its decor, but the hilltop location offers great views of the city. Perched atop another hill in the city is the baroque Igreja dos Clérigos with its distinctive 75 meter tall bell tower. The church itself is free to visit, and an entrance fee is charged for the attached museum and tower. Both are worthwhile—the museum has a wealth of religious art and artifacts, and the tower offers panoramic views of the city. 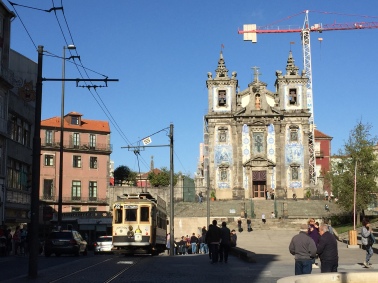 Views over the hills of Porto

Porto is known for its decorative ceramic tiles (called azulejos) that adorn the interiors and exteriors of many city buildings. Some of the finest azulejos in the city are found in the lobby of São Bento Station. Twenty thousand hand-painted tiles show detailed depictions of Portuguese history including battles, scenes with royalty, and the history of transportation, mostly in the traditional blue and white color scheme. The train station can get very crowded during the day, so we found the best time to really enjoy the tilework was first thing in the morning before tourists and commuters arrive. 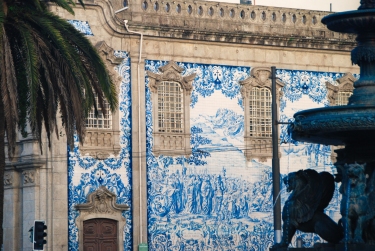 The tiled wall of Igreja do Carmo

A number of churches also have great examples of azulejos. Near the University of Porto, you will find the unique side-by-side churches of Igreja do Carmo and Igreja dos Carmelitas Descalços. Igreja do Carmo has an impressive tiled wall, dating to the early 20th century and showing scenes representing the foundation of the Carmelite Order and Mount Carmel. Igreja de Santo António dos Congregados, next to the São Bento Station, has a very recognizable tiled facade, as does Igreja Paroquial de Santo Ildefonso, perched on a hill above the train station near the national theater. 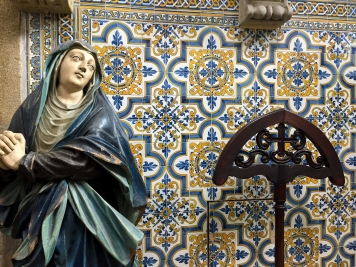 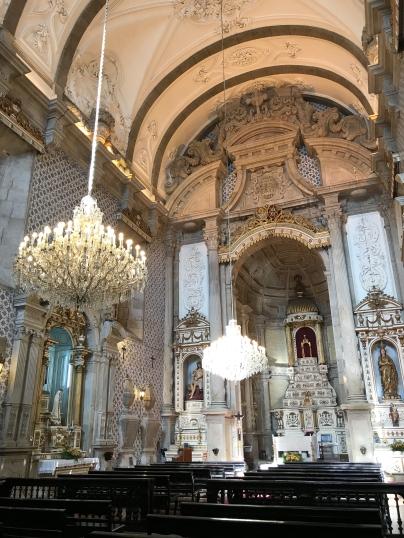 On the busy pedestrian Rua das Flores, Igreja da Misericórdia has a simpler facade, but a richly decorated and tiled interior that makes the church a must-see. Outside of mass times, entrance to the church is only through the Museu da Misericórdia do Porto, an interesting sight in and of itself. The museum is in the former headquarters of Santa Casa da Misericórdia, a 500-year-old charitable organization, and hosts a collection of art and treasures, much of which is linked to the organization and its benefactors.

Porto’s 19th century Palácio da Bolsa (Stock Exchange Palace), once the center of trade and commerce in the city 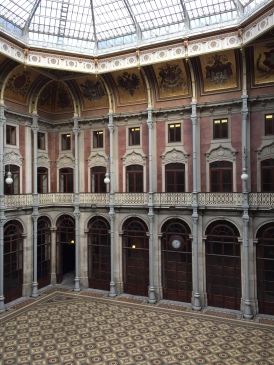 A decorative doorway in the Palácio da Bolsa’s Arab Room.

Another distinctive Porto landmark is Palácio da Bolsa, the 19th century stock exchange and commerce building. A guided tour (advance booking recommended) takes you through the most impressive parts of the building which include the glass-topped Pátio das Nações (Courtyard of the Nations), the Sala Dourada (Gold Room), where the city’s commercial association still meets today, and the Sala das Assembleias Gerais (General Assembly Room), where the decorative “wooden” walls were actually created out of plaster. The highlight of the tour is the Salão Árabe (Arab Room), an ornate Moorish-inspired ballroom with elaborate inlaid wooden floors, stained glass windows, and golden walls. 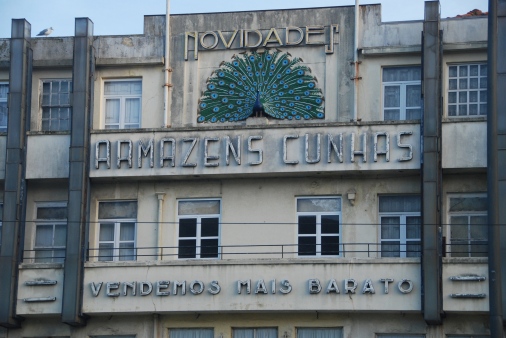 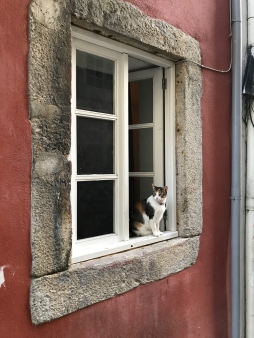 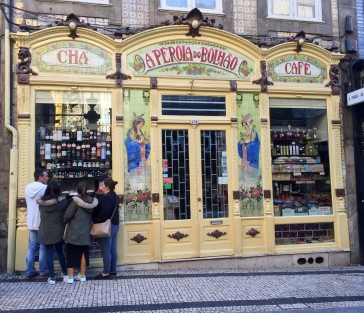 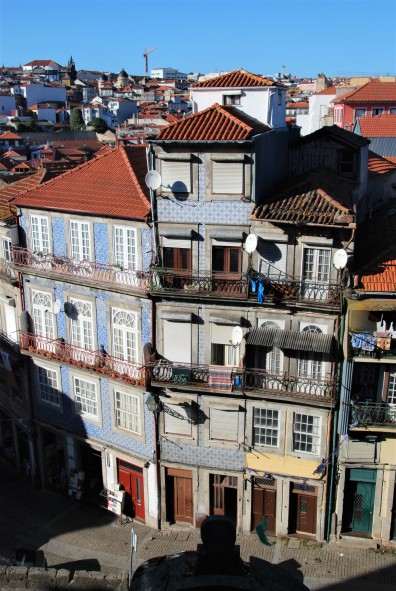 Tiled buildings in the city center

Part of Porto’s charm lies in its vintage, frozen-in-time feel. Buildings in the historic city center (many in various stages of disrepair or renovation) retain their original charm, and a number of interesting architectural styles can be found. One element of the “old Porto” which is still present today are the heritage trams which crisscross the city. The first tram opened in Porto in 1872, and the network grew in popularity until the 1950’s and 1960’s when the trams were gradually replaced by conventional buses. By 1996 functional passenger service ceased, but today the city continues to run vintage trams on three lines for tourists or locals who don’t mind a slower ride.

Trams on line 1 trundle all the way out to the coast along the river, while trams on lines 18 and 22 loop through the city and have a transfer location in front of Igreja do Carmo. A single ride ticket is 3.00€ and a 2-day ticket is 10.00€, and either can be bought on board the tram. Trams on lines 1 and 18 stop at the Museu do Carro Elétrico, a museum dedicated to the history of the tram in the city (there is a discount on admission if you show your tram ticket). The museum is located in the old power plant that produced electricity for the trams, and has an interesting collection of trams from various decades, as well as a look at the inner-workings of the vintage power station.

Another way to see the city is by water, and there are countless boat tours available from piers in Riberia, the historic part of the city next to Ponte Luís I. The six bridges tour is a popular option, and in just under an hour you can be ferried up and down the river to see the bridges that connect Porto and Vila Nova de Gaia and learn a bit more about the history through an audio tour. Ponte Luís I is one of the most striking bridges (and the one that you’ll see—and cross—without going on a boat tour), but the Ponte Maria Pia, a former railway bridge designed by Gustave Eiffel (the same Eiffel as the tower), is also beautiful and is best seen from the water. 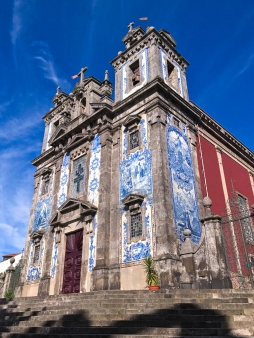 Colorful buildings along the Douro River

There are several combination tickets available for the popular tourist sights. The Porto Card is available with one, two, three, or four day validity, and offers free public transportation and free or discounted admission at a number of city attractions, plus discounts on restaurants, shops, and port cellar tours. For what we wanted to see in the city, we found a better value purchasing the 12.50 € triple entry ticket for Palácio da Bolsa, Clérigos Tower, and Museu da Misericórdia. There is also a 11 € triple entry ticket available for the Clérigos Tower, Porto Episcopal Palace, and Porto Cathedral Museum and Cloister. The triple entry tickets are available for purchase at the aforementioned attractions where it is valid.

Where to Eat & Drink

Porto is a dream city for anyone who loves good food and wine. As the home of port wine, there are numerous port cellars offering tours and tastings. Porto is also a coastal city with fresh seafood and produce, and excellent cafes and restaurants. Read more about our favorite port houses and restaurants here!

The obvious Porto souvenir is a bottle (or several) of port wine bought directly from the port houses; we always leave room in our suitcases for a few bottles! For other great take-aways, Chocolateria Equador sells all kinds of unique chocolate flavors (including a dark chocolate with port wine) all wrapped in beautiful packaging. We also loved the woolen goods at Ecolã, a Portuguese company that weaves blankets, sweaters and more from the wool of sheep living in the Serra da Estrela mountains.

As a city that’s best enjoyed on foot, scaling its hills and wandering along the riverside, staying in the historic city center is a great choice. There are plenty of hotel options and a growing number of rental apartments on sites like Airbnb. On our first trip, we enjoyed the modern accommodation at the Mercure Porto Centro, located uphill from the train station and a short walk from Rua de Santa Catarina, a major shopping street. While the rooms were compact, the location was great and their breakfast buffet was excellent, complete with local pastries and cheeses. On our most recent stay, we opted for an Airbnb apartment near the Palácio da Bolsa, just a few minutes walk from the riverfront and only a few blocks from the pedestrian Rua das Flores.

As Porto grows in popularity, flights are available from most European airports on both standard and budget airlines. United Airlines will even begin direct seasonal service from Newark in April 2018. Porto’s airport is small and easy to navigate, plus it’s just over 10 km (6 miles) from the historic city center.

From the airport, an efficient metro service brings you right into the heart of the city in about half an hour. Tickets are 2 € one way from the vending machines in the station. As an alternative, on our last trip we used Uber to travel from the city center back to the airport for less than 15 €.

The historic city center is not huge, so we enjoy getting around by foot. It is very hilly, however, so you might find yourself wanting a break. The metro and Uber both help for covering bigger distances, and the historic tram mentioned above can be a fun way to reach various parts of the city.

There are a couple ways to climb the hills more easily when your legs need a rest. Along the Porto side of the river, at the foot of the lower level of the Ponte Luís I, there’s a funicular that scales the steep hillside, offering great views and bringing you up to the higher part of the city with easier access to the cathedral and São Bento Station. A one-way trip is 2.50 €. On the opposite side of the river, Vila Nova de Gaia has its Teleférico, a cable car that links the riverfront area with the upper deck of the Ponte Luís I. The five minute ride offers great views of Porto as it passes by—and even over—many of the famous port houses. Tickets are 5 € one-way or 8 € for a round-trip. There are also several ferries that cross the Douro River between Porto and Vila Nova de Gaia frequently.

Visiting Porto? Read more about our favorite restaurants and port houses in this blog post!

One thought on “Perfectly Porto: The Sights of the City”