Portugal’s second-largest city is well-known for its stunning riverside location and its beautiful, UNESCO-listed historic city center. While these features would make a trip to Porto worthwhile on their own, the real draw for many visitors is Porto’s outstanding cuisine and port wine.

Porto has been at the epicenter of port wine production for centuries. Prior to the 17th century, the British traditionally imported wine from France. Due to military conflicts between the countries in the 17th and 18th centuries and a subsequent boycott of French goods by the Brits, the British turned to other sources and started importing wine from Portugal instead. The greater distance between the countries meant that a lot of wine was spoiled upon its arrival in England. Eventually they discovered that the addition of some brandy to the wine helped to preserve it for the voyage, thus creating the foundation of port wine as it exists today.

Authentic port wines are produced only by grapes grown up river from Porto in the Douro River Valley. The Douro region was demarcated as being the only region for true port wine production in 1756, and today the region and industry are regulated by European Union Protected Designation of Origin guidelines. Fortified wines are produced in many other countries around the world, but true fortified wines that can be called ports will have a seal of guarantee from the Instituto dos Vinhos do Douro e Porto.

Port wines are produced from both white and red grapes, with the red varieties being most common. Ports made from white grapes are simply called “white port,” while ports made from red grapes can come as “ruby port,” “tawny port,” or the less common “rosé port.” Ruby ports are young (aged less than three years), while tawny ports may have been aged 10, 20, 30 years or more.

Grapes are picked by hand on the terraced vineyards in the Douro River Valley. The grapes are crushed and added to fermentation tanks, like traditional wine, but midway through fermentation a grape spirit (known as aguardente) is added, which stops the wine from fermenting further. The resulting wine is sweeter due to remaining residual sugars and also has a higher alcohol content.

The fermentation and fortification steps typically happen at the vineyard before the wine is moved downriver to a port cellar for aging (most often in oak barrels). British merchants established many of the oldest port cellars in Vila Nova de Gaia, where they could easily age and export their finished product to Britain. The wine they received was moved downriver on flat-bottomed rabelo boats until the 1960’s when hydroelectric dams were built on the Douro River. Today the wine is transported to Vila Nova de Gaia by tanker truck, and is still aged in many of the same historic cellars.

It can be hard to know where to start with port tasting in Vila Nova de Gaia—there are dozens of port cellars, each with its own history and culture. A list of some of the largest and most prominent port cellars can be found on the Porto Wine Cellars website. At many of the cellars you have the option of a tasting and/or a tour, and it is worth doing a tour at least once to really understand the production and variety of port wine. You will learn firsthand about the history of port in the region, the varietals that are being made, and be able to walk through the cellars where the port barrels are being stored.

We had our best success with port cellar tours at some of the smaller, more off-the-beaten track producers. We stumbled upon Augusto’s by chance on our first trip to Porto and it’s our personal favorite. Tucked down a small alley, we ducked out of the rain into their rustic space and were pleasantly surprised. They are a family-run business producing about 35,000 bottles a year, and offer an personal and informative tour and tasting. We also like nearby Quinta dos Corvos, an even smaller operation that produces about 25,000 bottles of port annually, plus about 5,000 bottles of table wine. Both producers are on the smaller side of what you will find in Porto, and their ports are not readily available outside the tasting rooms. We like to stock up on ports from these two producers, in particular, as you won’t find them elsewhere for sale and they make for a unique souvenir. 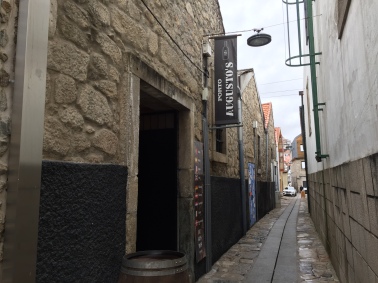 The entrance to Augusto’s port cellar

Rabelo boat on the shore of the Douro River

Port cellar tours in combination with the tastings can range on average from 5-15 € depending on the property and the amount of port samples including in the tasting. In some places, there may be a discount if you purchase a bottle of port after your tasting is complete.

Many of the larger properties require reservations in advance for the tours due to popularity, and we found that we were just as happy to sit in the tasting room and sample some of the ports instead of taking a full tour in these places. We enjoyed a tasting flight at Ramos Pinto, set right on the Douro River, and we also liked Croft, a historic port cellar set off the river with a large stone-walled tasting room. The modern Espaço Porto Cruz offers a different type of port experience. The multi-level building was renovated in 2012, and holds a tasting room, restaurant, rooftop terrace, and exhibition space. Although they are not aging port on-site, you can try different offerings in their ground floor tasting room. We especially loved the port and chocolate pairing where you can try three of their ports with specifically chosen, locally-made chocolates.

Beyond the port cellars, you will find a number of wine bars throughout Porto, and each can recommend a port to compliment your dish or dessert. We particularly like Wine Quay Bar set in a historic building on the river in Porto. It’s a great place for a pre-dinner drink or light afternoon snack.

In addition to being popular for its wines, Porto is also one of Europe’s gastronomic stars. The city has a fantastic range of traditional Portuguese restaurants as well as more modern offerings, plus cozy cafes, confeitarias overflowing with freshly baked treats, and wine bars perfect for a late afternoon glass of port. Given the coastal location there is no shortage of seafood on restaurant menus, but you can also find hearty meat entrees and lots of fresh vegetables as side dishes. It’s not the easiest city for a vegetarian to find a substantial meal as many restaurants only offer fish and meat main dishes, but we managed to find many fantastic places that suited all our palates.

The best way to start the day is to stop at a Portuguese bakery (confeitaria) for some addictively good pastel de natas. These traditional egg custard tarts are best fresh out of the oven when the crusts are still crispy. We loved the pastel de natas we found at Confeitaria São Domingos located just past the southern end of Rua das Flores, as well as at Padaria Riberio which was recommended to us by a local and is located closer to Clérigos Church. 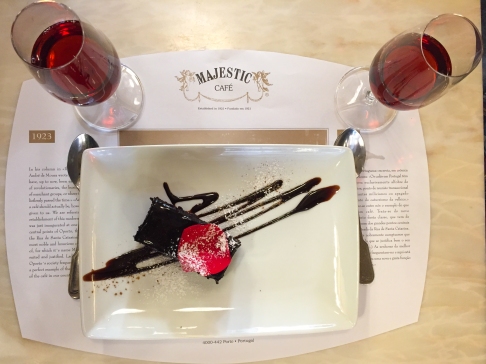 Dessert and port at Majestic Café 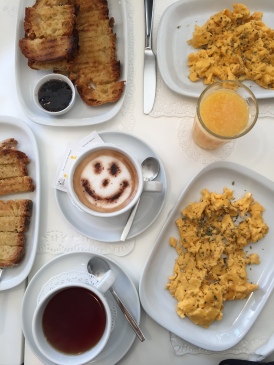 For a more substantial breakfast, we enjoyed Mercador Café located on the pedestrian Rua das Flores, not far from the train station. The ovo no forno (oven baked eggs) were fantastic, and they can also do a vegetarian version with mushrooms which isn’t featured on the menu. We also made the trek up the hill to Dama Pé de Cabra, a small grocery store turned cafe with a small handful of tables both inside and out. They have a simple brunch menu featuring eggs and specialty breads, and they offer a comprehensive breakfast sampler including juice, a hot drink, scrambled eggs, and different types of Portuguese bread. The breads are worth the trip! The rustic bread (a more traditional version) is served with a port wine reduction, and you can also choose their carrot, pumpkin or chestnut breads (we sampled all varieties!).

For a mid-day snack or heartier lunch, a trip to the beautiful Belle Époque Majestic Café on the pedestrian Rua de Santa Catarina is a must when in Porto. It’s a perfect place for afternoon tea and pastries, and some patrons also order the Porto-speciality sandwich the francesinha. The francesinha, a massive sandwich of ham, sausage and steak, topped with a fried egg and smothered in a cheese sauce, is found at upscale restaurants and casual eateries alike. For a one of the best versions of the francesinha in a casual setting, head to Café Santiago, a few minutes walk from the Majestic Café.

A great place to get a sense of the local culture and get a more casual bite to eat is at Mercado do Bolhão, a two-story neoclassical market dating back to the 19th century. It is still very much a locals market, with vendors selling fish, meat, produce and flowers, but there are a few stalls where you can get a snack or a glass of wine. As an alternative, Mercado Beira Rio has just reopened in Vila Nova de Gaia, and it is a modern market with vendors and food stalls, plus ample seating for those looking to take a break from port tasting to grab a snack or meal. 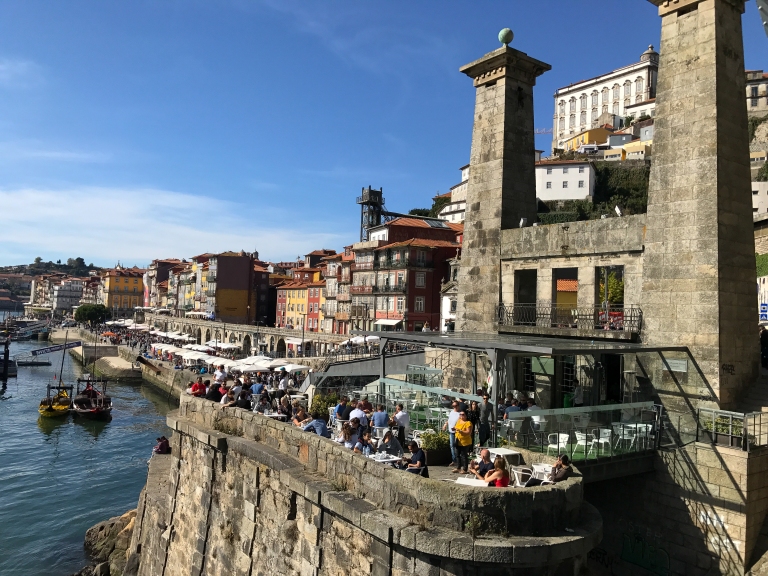 Much of the activity in Porto centers around the waterfront, and there’s no shortage of restaurants in this area. Our favorite restaurants for dinner include A Grade, a small tavern on a side street near the river, and the neighboring Adega de Sao Nicolau, which offers a more modern interior, but a similar seafood-focused menu. Right around the corner, next to a tiny church, we had lunch at Terrerio, a two level restaurant with ample outdoor seating and river views. The neighboring street of Rua Fonte Taurina is also lined with restaurants, and we had another good lunch at Taberna Esta-se Bem. Away from the waterfront, we had one of our favorite dinners at Restaurante Flor de Congregado, set on a side street near the train station. This family-run restaurant is over 160 years old, and their menu features delicious seasonal specialties. 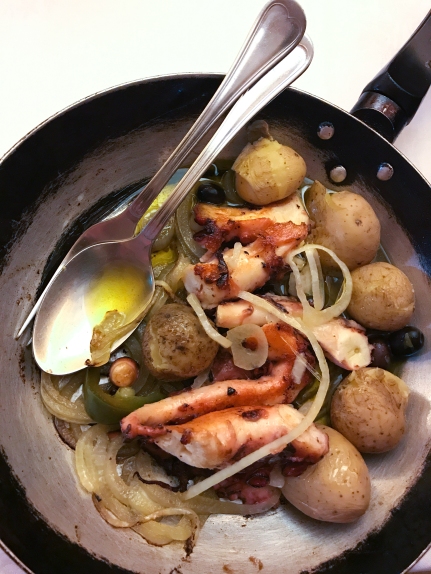 The city’s specialty of polvo no forno—octopus and vegetables

Many of Porto’s restaurants are small, and we found that dinner reservations were a must in order to not be disappointed. As a city near the coast, seafood lovers will especially enjoy the dining options. There’s plenty of local bacalhau (cod) on the menus and the polvo no forno, baked octopus with potato, onion, and pepper, was Andrew’s favorite dish; you can be find it at many of the city’s restaurants, including A Grade and Terrerio. Vegetarian entrees can be hard to find, but nearly every restaurants offers at least a salad and/or vegetable soup. A Grade and Restaurante Flor de Congregado were two stand-outs in offering vegetarian-specific entrees.

One thing to note when dining out is that many restaurants will start with some small appetizers on the table. While the cod fritters and other finger foods are tasty, keep in mind that they aren’t complementary and you will be charged by the piece.

Colorful buildings in the Ribeira area of Porto 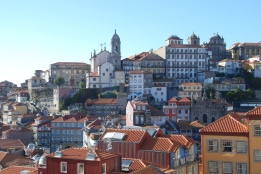 The hills of Porto

As much as we love eating and drinking our way through Porto, there’s a lot of spectacular churches, museums, and other historic sights to see as well. We love wandering through the hills of the city and exploring the various neighborhoods as much as we like sampling the port houses. Read more about our favorite sights here!