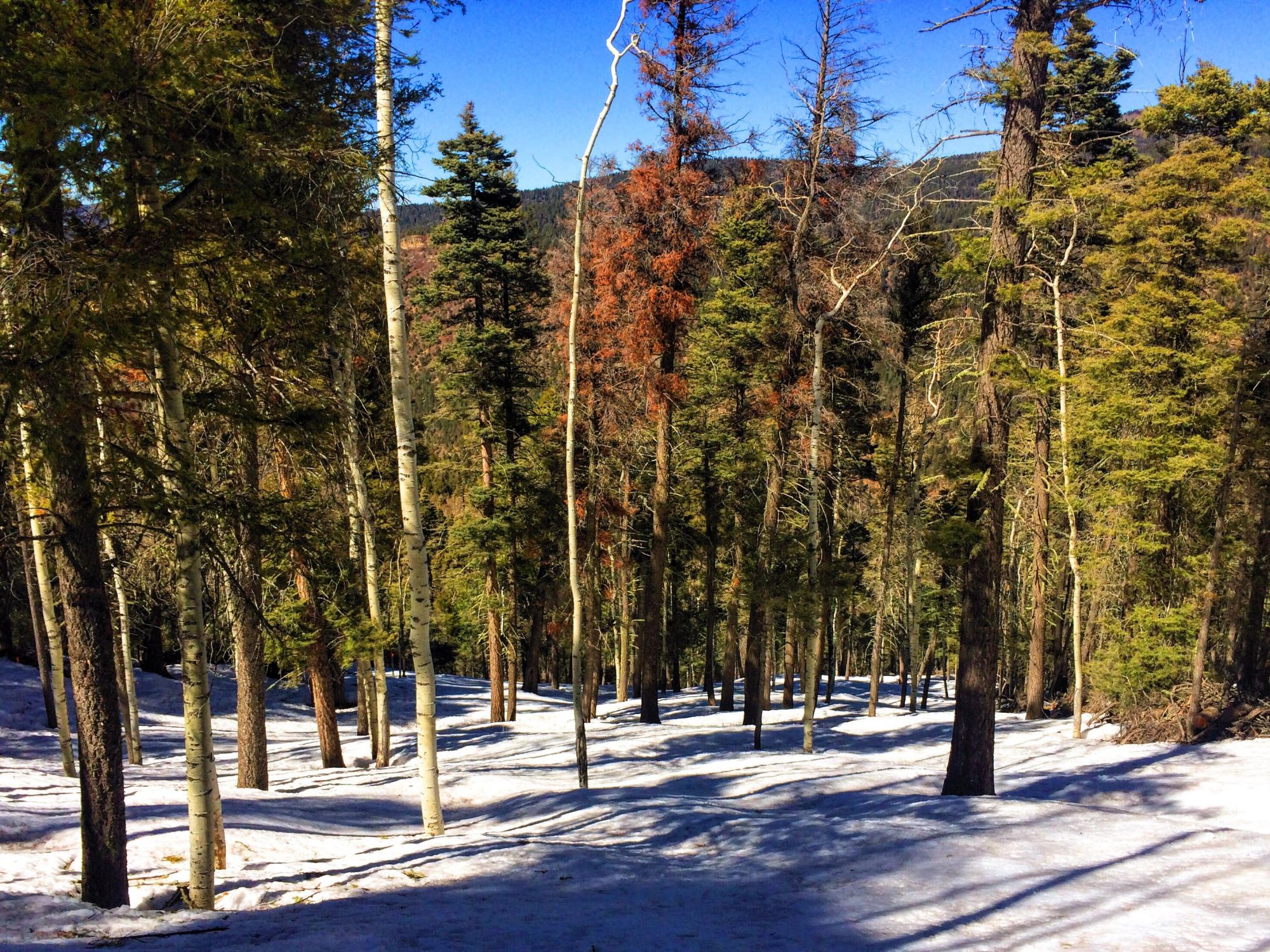 When you think of ski destinations in the western U.S., New Mexico is rarely the first place that comes to mind. Better known for its dry deserts, UFOs, and spicy chiles, the state is also home to a number of ski resorts with interesting terrain, beautiful views, and dry snow. Always looking for off-the-beaten-track destinations, I traveled to New Mexico in March 2016 to explore some of the ski areas there.

While I’ve skied the legendary steeps of Taos before, there were a number of smaller resorts I wanted to check out this time around. An El Niño winter brought lots of early snow to this part of the southern Rockies, but a snow drought since early February meant primarily spring conditions on a deep base for my visit. Sunshine was abundant, snow conditions were very good overall, and despite visiting during the Texas and Oklahoma school vacation week, New Mexico’s resorts lack the big crowds of their better-known neighbors further north in the Rockies.

A scenic one hour drive from the Santa Fe airport, Pajarito is a great local ski area near the city of Los Alamos. The ski area was founded in the 1950s by research scientists from the National Laboratory looking for some nearby recreation. You get a reminder of this when you pass a security checkpoint on the outskirts of town, but a quick ID check and you can continue on your way. It was a nice, relaxed ski area for an afternoon of spring skiing the same day I flew in from the east coast.

The Scene:
Pajarito has a simple, rustic base area. There are no hotels or condos here – just the basic facilities for skiers and snowboarders like a rental shop and a homey base lodge. Parking is just a short walk from the slopes. While the ski area has grown significantly since its early years and it’s open to the general public, it still retains the feel of a local community ski area. It was mid-March and spring break for schools in Texas and Oklahoma, but none of those out-of-state vacationers seemed to have discovered Pajarito; there weren’t more than two dozen other people skiing on the quiet Monday afternoon I was there. Good snow early in the season led management to try a 7-day-a-week schedule for the month of March, but the warm spring sun had done a number on the snow in the base area and at the top of the mountain, closing some trails.

The staff I interacted with, especially the lift operators, were casual and very talkative. Unlike visiting a larger resort where the customer service culture is taught, it was clear that everyone here had a genuinely friendly personality, along with a love for Pajarito and the sport of skiing or snowboarding.

The Skiing:
Pajarito is basically a long ridge with most of its trails running more or less right down the fall line. Despite the seemingly boring layout on the trail map, the terrain I sampled was a lot of fun, and each trail had its own unique character. With the summit at 10,440’,  Pajarito held good snow even though most of the surrounding area was bare. From the top of the Aspen chairlift, you can traverse to the left or right, accessing the majority of the mountain despite the other lifts not running.

With bright sunshine and temperatures hitting the high 40s in the base area following a good freeze overnight, I was treated to near-perfect spring corn snow. Advanced trails like Lumberyard, Wildcat, and Mal’s Run had nice moguls, while the lower half of the Aspen liftline and the intermediate Pussycat run were perfectly groomed for great cruising. Venturing a little further east, Lone Spruce and Daisy Mae offered up more smooth cruising with a mellower pitch, and I imagine that side of the mountain would be perfect for novices and low intermediates. The steep “fab four” off the Mother Chair – Nuther Mother, Sidewinder, Breathless, and Precious – are said to offer up some of the best bump skiing in New Mexico. While they weren’t accessible during my visit, it looked like they would have some fun terrain.

While the couple hours I had to ski gave me a nice feel for the mountain, I certainly would have liked to have had more time to explore more of the terrain. With its uncrowded slopes, friendly and laidback atmosphere, and promise of some fun bump skiing, I hope to re-visit Pajarito again in the future with more time and even more snow.

About 35 minutes southeast of the town of Taos, up in thickly forested mountains, Sipapu’s pretty, tree-filled base area is snuggled against a gently flowing mountain stream at the foot of the slopes. With very reasonable prices, convenient lodging, and all trails leading to a single base area, Sipapu is a favorite of families with young kids and beginners.

The Scene:
While there were many out-of-state plates in the parking lot, most of my visit did not feel crowded. When I arrived, the base area was abuzz with families getting rentals, signing their kids up for lessons, and getting ready for a day on the slopes, but it wasn’t a zoo and there was still plenty of room to move around. On the mountain, there was never a wait to get on the lift and most of the trails, especially the advanced runs, were pretty empty.

The Skiing:
With its base lodge at 8,200’ and summit at 9,255’, Sipapu was the lowest resort I visited and the conditions were noticeably more spring-like. New Mexico’s dry desert air means that spring snow will set up firm overnight, even if temperatures are barely below freezing, and direct sunlight does more to soften the snow than air temperatures. Although it was already in the 40s when I started skiing, most of the snow was still firm, so I started off checking out the groomed terrain. The bulk of Sipapu’s skiable terrain is accessed by lift #1, a triple chair that rises about 900’ from the base area. From the top, the green Sassafras gently zig-zags down the mountain and offers access to blue cruisers along the way. Most of these tend to be narrower trails that meander through the woods, giving the terrain more of a New England-like feel than you’d expect in the Rockies. There aren’t many top-to-bottom runs right down the fall line, but runs like Loose Caboose, Butterfly, and Howdy offer pretty cruising. For experts, lift #1 offers up some moguls directly under the lift, a number of runs through the trees, and some fun terrain like Paul’s Folly, a natural gully. Steeps like Oops and Flower had a nice pitch, but were fairly short.

In the afternoon, when the strong March sun had begun to soften up the ungroomed terrain, the upper chairlift, #4, started spinning and I headed up to explore the glades. The lift is short – only about a 2-minute ride to climb 250’ of vertical – but it opened up a large area of fun tree skiing. The snow was still on the firm side, but the top layer had just enough softness to get a good edge in, and I enjoyed lap after lap through the trees as the afternoon sunshine filtered in through the treetops. According to a season passholder I met, powder days there are a real treat since most of the skier traffic is concentrated on the easier terrain, leaving fresh snow all day. Monday to Thursday, Chair #4 only runs in the morning, closing at 11:00 or 11:30, meaning that the fresh snow in the upper mountain glades can last for days after a storm.

There’s more easy terrain available from the new quad chair on the lower mountain, and lift #3, a poma lift near the summit that serves some gentle trails and a couple natural, Stash-like terrain parks.

The Resort:
Lunch was the only time the ski area felt crowded. I checked out the dining room on the second floor of the base lodge, where they serve pub fare like burgers, pizza, and local chile cheese fries. With most of the food made to order, and only one person working the counter, it took a while to place my order, but the food came out quickly. The dining room lacked natural light and felt like it hadn’t been updated in decades, but fortunately there were plenty of seats available to eat outside in the sun right next to the creek. I read that there was a creekside café that had been lost in a recent fire and they plan to replace it soon, so dining options should be improved in the near future.

With its remote location, Sipapu feels like a miniature, self-contained resort with everything from basic hotel rooms and rental cabins to a small general store. During off-peak periods, you can get an overnight stay for free just by buying a full-priced (but already inexpensive at $44 in 2015-16) lift ticket. It’s a great choice for families looking for a convenient and inexpensive ski vacation. Advanced skiers can have fun there too and I certainly enjoyed my day of spring skiing, especially when the uppermost lift is open for access to the glades.

The tiny Santa Fe Municipal Airport is the closest commercial airport to the mountains. It was an easy one-hour drive from there to Pajarito, 1.5 hours to Sipapu, 2 to Taos, and under 2.5 to Red River. United and American both fly into Santa Fe. For more flight options, the Albuquerque International Sunport is about an hour further from the mountains (south of Santa Fe) and is served by all major domestic airlines plus JetBlue and Southwest.

To explore numerous resorts or to access any of the smaller mountains, a car is the only way to go. Almost all the vacationing families I spoke to from Texas, Oklahoma, and Arkansas had all driven the 10 to 14 hours to the mountains. I was happy renting from Avis from the Santa Fe airport, especially since they didn’t charge extra to return my car to the Albuquerque airport when my flights home changed.

If you want to do a ski trip car-free, Taos Ski Valley has a shuttle service available from the Albuquerque and Santa Fe airports. Once you’re there, there are plenty of restaurants and shops to keep you occupied after the lifts close, though you’d miss out on visiting the town of Taos.

One thought on “Snow in the Land of Enchantment: Skiing New Mexico”