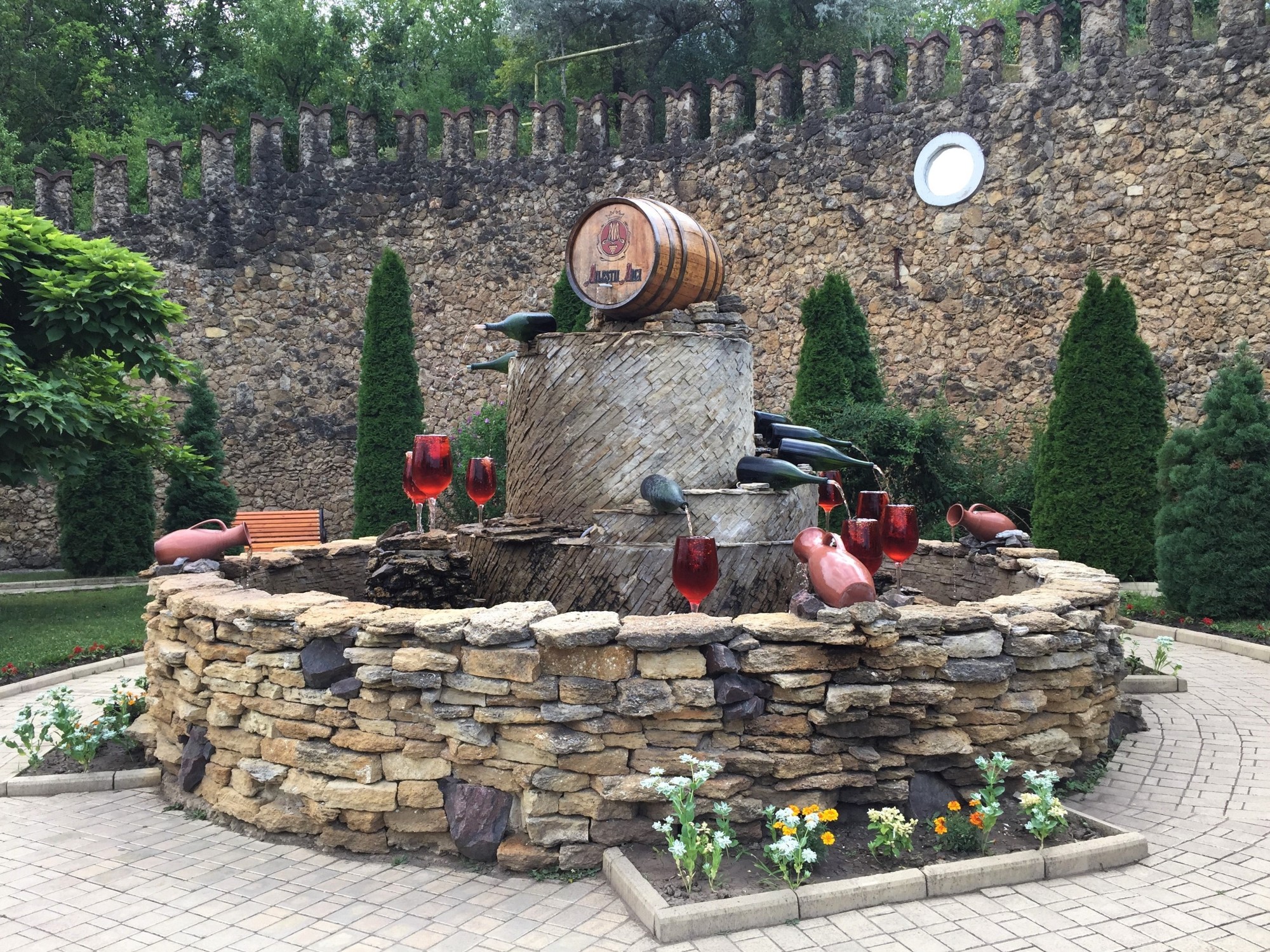 When you think of the greatest wine producing regions in Europe, Moldova probably doesn’t spring to mind immediately. When we started planning our recent trip to the country, however, Moldova’s wineries kept coming up as a “must see” in the region. Located on the same latitude as many other top wine-producing regions in Europe, Moldova has four distinctive wine growing regions producing mostly red grapes in the south and white grapes in the central part of the country.

Viticulture was brought to the region by the Greeks and Romans who once occupied the area. Wine production continued through the Middle Ages and grew under the Russian Empire following the annexation of the region in 1812. Moldovan wine became a staple at the Tsar’s residence and after a Moldovan wine won a gold medal at the international exhibition of 1878 in Paris, it also became popular with other aristocrats across Europe. Moldova continued to be important to the Soviets, and after WWII half of all the wine consumed in the USSR was produced in Moldova. Since the country’s independence in 1991, the Moldovan wine industry has continued to evolve. Today there are 142 wineries in Moldova (23 of which can host visitors) and nearly a quarter of the population is involved in winemaking and viticulture.

Two of the easiest wineries to visit from Chișinău are Cricova and Mileștii Mici, both located very close to the city which makes it possible to visit them on the same day. We were informed that the legal blood-alcohol limit in Moldova is 0.03%, which makes it difficult for the driver to enjoy the full winery visit and tasting experience, so we arranged a tour of the two wineries through Winetours Moldova. The company arranged the bookings with the wineries and provided a driver who picked us up from our hotel and transported us to both sites. Having the driver was especially crucial at Mileștii Mici where you must arrange your own transportation to tour their cellars. 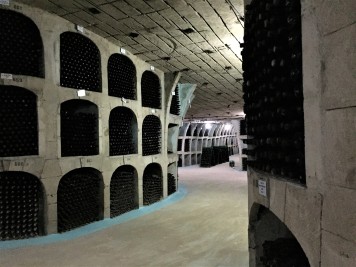 The wine cellars at Cricova Winery

The “Seabed” tasting room at Cricova Winery, inspired by the Sarmatic Sea which was present on this site 12 million years ago.

The oldest wine in Cricova’s collection—a 1902 “Easter Jerusalem” wine. Produced in a single batch, this is the only remaining bottle in the world. 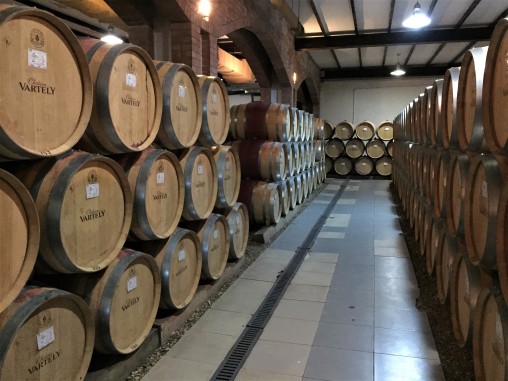 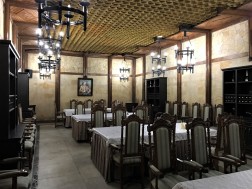 The visits were unlike anything we had been anticipating. We were aware of the scale of the places—Cricova boasts 120km of underground cellars, and Mileștii Mici, with its 200km of tunnels, holds a Guinness World Record for having the largest wine collection in the world (over 2 million bottles today). What we didn’t expect was that our day would be completely subterranean. The locations we visited are really just the production facilities and the aging and storage cellars. Grapes are grown around the country, and these locations serve as the hubs of wine storage for the respective producers. Upon arrival there are no sweeping vistas of grape vines or extensive above-ground amenities, but you are quickly plunged underground to the limestone caves to learn more about each winery. (The caves were actually created during construction of Chișinău when limestone was the primary building material.)

The visit to Cricova takes place on an underground shuttle (like a small train) that whisks visitors from place to place in the underground city (the “city streets” have wine-inspired names like Cabernet-Sauvignon and Riesling, named for the wines they store). Cricova is known for being the first in Moldova to create sparkling wine, and part of the tour is looking at this process first-hand. The sparkling wine bottles are rotated daily, with most bottles being turned by hand but some now being done by machine. Following the tour of the sparkling wine facility, there is an informational movie (complete with a sparkling wine tasting) and a tour of the collection. 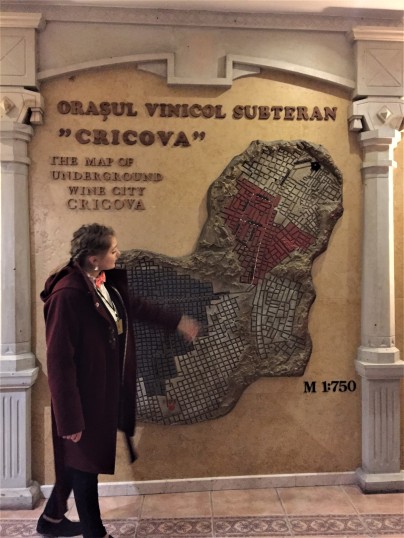 Map of the underground wine tunnels at Cricova

Barrels of wine in storage at Cricova Winery 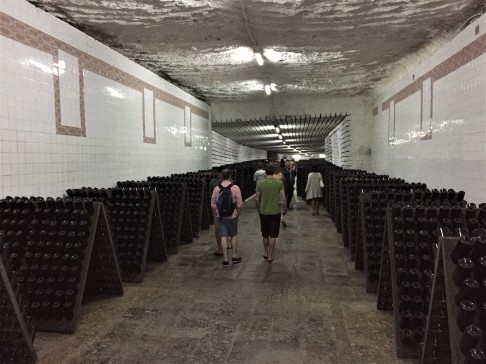 Sparkling wine storage at Cricova Winery. The bottles are stored at the perfect angle for sediment to filter to the neck, and are rotated daily by hand.

The special collection at Cricova contains over one million bottles, and the private wine “casas” have a variety of interesting and noteworthy owners. Russian President Vladimir Putin has a collection on display (and chose the winery for his 50th birthday celebration), and former U.S. Secretary of State John Kerry and Chancellor of Germany Angela Merkel have wines in storage as well. Also on display is the oldest wine in the collection, a 1902 bottle from Jerusalem.

Following a walk through the private cellars, we concluded our visit in one of the underground tasting rooms (this one called “Casa Mare” which was set up to look like traditional home, complete with windows lit from behind to look like daylight). The overall visit experience was probably the most satisfying of the three wineries we visited—we got to learn about their specialized sparkling wine process, the film helped give context, and we had a convivial tasting with delicious snacks.

At Mileștii Mici, as noted above, you have to provide your own transportation to participate in a tour of the cellars. The tour guide leads the convoy of cars/vans from site to site within the underground city to show some features of their cellars, and you also get to tour the collection on foot.

Lunch in the underground tasting room at Mileștii Mici 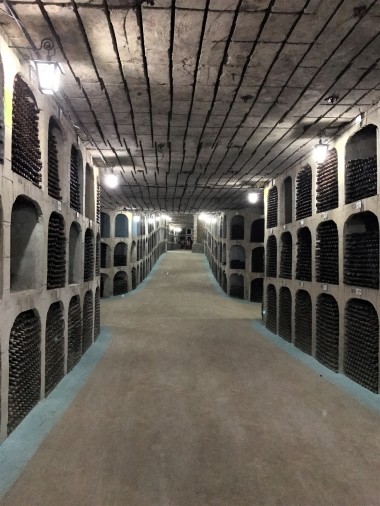 The special collection at Mileștii Mici doesn’t have the noteworthy owners like Cricova, nor the longevity in the history of the collection (the oldest wine in the collection is from 1969). What they do have is volume—thousands of bottles are added annually to their Guinness World Record-sized collection. We had lunch at Mileștii Mici, which was delicious, and included a tasting of several of their wines—but, of course, the lunch was served in one of the grand tasting rooms underground!

When we left Chișinău for Orheiul Vechi, we also wanted to make a stop at one of Moldova’s newer wineries, Chateau Vartely. We were unable to secure a reservation in advance, so we just showed up to see what options were available. Signage directing us to Chateau Vartely was inconsistent, and until we pulled into their parking lot we weren’t confident we were headed to the right place.

Views from the patio at Chateau Vartely 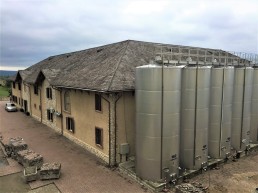 The bottling plant at Chateau Vartely 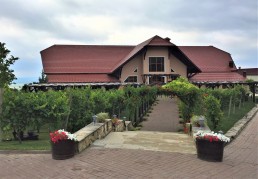 Main building at Chateau Vartely, containing the restaurant, tasting room and wine storage in the basement.

Tasting room at Chateau Vartely, showcasing their wine collection from around the world.

Once you arrive, however, you discover a new property with lodging and a restaurant with sweeping views over Orhei and the valley below (additionally—a few grape vines on site!). We were able to arrange a tour of their facilities as soon as we arrived and saw their aging cellars and tasting rooms.

All of the wineries we visited have shops on-site where you can buy wine direct from the source, and they generally had wines from other Moldovan producers as well. Moldova produces both red and white wines, and has several varietals that are unique to the region. Good quality wines start at the equivalent of just a couple euros and the premium, collection-quality wines were a fraction of what their western European counterparts would cost.

Moldova is very proud of their tradition of wine production, and indeed, it is one of the largest draws for foreign visitors. The industry seems to be well poised for future growth and development and increased resources for visitors as well. Although we had hoped to get a better sense of the grape growing process and some sweeping vineyard views, what we discovered instead was an unexpected but enjoyable experience in learning more about Moldova’s wine traditions—and the chance to sample some really delicious wine too!