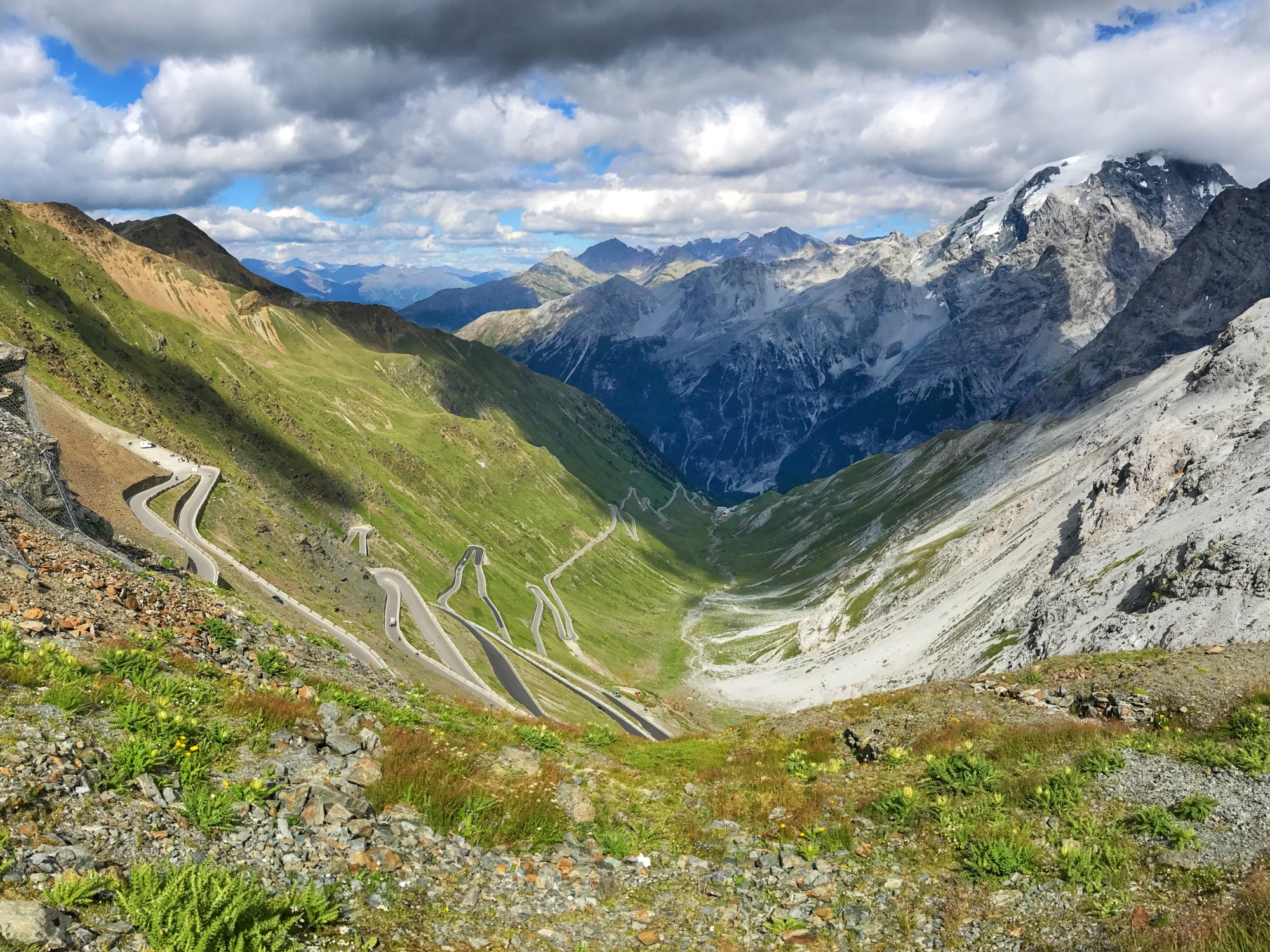 Since moving to Europe over a year ago, the glaciers in Austria have been my go-to summer skiing destination as I continue my quest to ski every month. This July, looking for something different, I headed a little further south to Italy.

Passo dello Stelvio is a unique place for several reasons. It’s home to the only glacier in Italy that still hosts lift-served skiing throughout the summer. (At Italy’s other summer ski destination, Cervinia, the skiing is actually in Switzerland but can be reached by lifts from either the Italian side or the Swiss resort village of Zermatt.) There are many glacier ski areas like it in Europe, but what makes Passo dello Stelvio stand out is that you can’t ski there in the winter! The base of the ski area sits on a high mountain pass; in fact, it’s the highest pass in Italy and second-highest in Europe that’s crossed by a road. At 2,757 meters (9,045’) above sea level, the snow gets deep here in the winter and the road remains closed. Skiing is possible only when you can get there via the road, typically from late May to early November. In 2017, perhaps for the first time ever, skiing had to be suspended for a few weeks in August due to a record-breaking summer heatwave that hit Europe and melted a significant portion of the snowpack.

The pass is also interesting from a cultural standpoint as it sits along the borders between three different regions and three separate languages. Before World War I, this spot was where the Italian-speaking Kingdom of Italy, the German-speaking Austro-Hungarian Empire, and Switzerland’s Romansch-speaking Grisons canton all met. After the war, Alto Adige (South Tyrol), on the east side of the pass, became part of Italy, but the region’s inhabitants are still predominantly German speakers. The border with Switzerland remains unchanged, though you won’t see many signs of it while hiking. The point where all three regions meet is appropriately known as the Peak of Three Languages (or Three Tongues) in German and Romansch.

While summer skiing has been a major attraction on Passo dello Stelvio since the 1930s, the road and pass are popular today with cyclists and motorcycles, in addition to hikers and mountain bikers.

Like most glaciers, Passo dello Stelvio’s northern-facing Livrio glacier isn’t particularly steep, with most of the terrain suited to low intermediate skiers and snowboarders. Mid-summer, though, any sliding on snow is a treat. While many ski clubs and national race teams train here, the ski area was generally uncrowded with short lift lines when I visited in mid-July.

From the top of the pass, a tramway first climbs Trincerone where a funitel then continues to reach the glacier itself above 3,100 meters (10,200’). Above that, four pomalifts (platters) serve the main ski area: the twin Geister lifts serve the largest area with mellow slopes on both sides, Payer serves the steepest—but shortest—pitch of the groomed terrain, while Cristallo has the longest runs. Skier’s left of the Cristallo lift had fun, rolling terrain. While it was reserved for race training most of the day, it was a lot of fun when it opened to the public late morning. Most of the glacier runs are about 600-900 meters long with a 130-150 meter (420’-500’) vertical drop. The highest lift reaches about 3,350 meters (just shy of 11,000’) meters above sea level.

When the snow is good, you can ski all the way back down to the pass, for a long, 600 meter (2,000’) vertical drop run. I was told that you used to be able to ski that run in July fairly regularly, but warmer summers in recent years mean that it’s often only skiable right at the beginning of the ski season. When I was there, the run from the glacier to Trincerone (top of the first tram) was officially closed, but several skiers still made their way down a limited snowpack to download the tram the rest of the way to the bottom. Everybody else rode both the funitel and tram to the pass. There’s also a backcountry ski run that goes from the base of the Cristallo lift back to the road, down on the Bormio side; it’s only skiable in the springtime.

In the heat of mid-summer, skiing hours are generally limited to the mornings. In mid-July, a 7:00 a.m. start guaranteed firm conditions for the racers, and the snow started to soften nicely to spring conditions by the time the lifts closed at 1:00 p.m. Hours vary at different points in the season depending on the weather and snow conditions.

Beyond the famous skiing, there are lots of scenic hikes available. While several trails are available on the north-facing slopes (allowing you to ride the tram and funitel as a foot passenger one way and hike the other way), I preferred the hiking across the road on the northern side. There, the winter snow was long gone and the trails enjoyed nice afternoon sunshine.

Following a steep climb up from the road to Rifugio Garibaldi, you reach the Swiss border about 100 meters higher than the pass itself. From here, trails branch off in all directions with great views wherever you decide to go. Heading east towards a small, currently dry lake, a number of informational panels tell the story of the pass’s role in World War I.

Going north, you’re in Switzerland after a few minutes of walking and the trail starts to plunge down towards the Umbrail Pass with a steep series of switchbacks—it felt a bit like the hikers’ version of the Passo dello Stelvio road! There are some buses servicing the surrounding towns, including the Swiss side of the pass, so it’s possible to hike out and take the bus back up to the pass, or vice versa.

Construction on the road over Passo dello Stelvio began in 1820. At the time, Milan was part of the Austro-Hungarian Empire and the emperor wanted a road linking the Italian city to the imperial capital of Vienna. Crews finished work on the road quickly and it opened in 1825. In the early years, they cleared snow all winter to keep the road open year-round. It wasn’t until after WWI, when both sides of the pass had become part of Italy, that the link to Vienna became less important and winter clearing of the road ended.

It’s a challenging road to drive, with 48 tight switchback turns as it climbs about 1,800 meters (5,900’) from Prato allo Stelvio to the east on the Alto Adige (South Tyrol side). Arriving from the west is slightly mellower, with just 34 switchbacks along the 24 kilometers coming up from the resort town of Bormio in Lombardy. The challenge of the road, combined with its incredible vistas, makes it especially popular for motorcyclists and bikers. It has been featured as a leg in the Giro d’Italia road race several times. With mixed traffic, and many switchbacks only wide enough for one direction of travel at a time, you need to plan on a potentially slow trip up or down. In the spring and fall, you might be required to carry snow chains since it can snow at that elevation nearly any time of the year.

The bank branch at Passo dello Stelvio has a small museum dedicated to the construction and history of the road, including its role in WWI and the development of summer skiing there.

Since the drive up the mountain road isn’t the easiest, and the ski day starts relatively early, it’s best to stay right at one of the hotels atop the pass. There are several to choose from, and I spent a couple of nights at Hotel Quarto Pirovano. As I expected from traveler reviews I had read, the Pirovano was like a retro ski lodge, complete with wood-paneled rooms and 1970s furnishings. Since the hotel is only open for a few months a year and there’s limited access to the place during the winter, that means there haven’t been too many upgrades. Everything was clean, functional, and comfortable, so I had no complaints at all, but you shouldn’t expect much modernity beyond the good wi-fi connection.

The location is fantastic: at the top of the pass, the tram to the glacier is a short walk across the parking lot and everything else on Passo dello Stelvio—from hiking trails to restaurants and souvenir shops to Europe’s highest bank branch—are only a few minutes away by foot. The food at Pirvano was very good too. Breakfast was served buffet-style with an above-average selection of Italian breakfast foods. Lunch and dinner is only offered to guests (either as part of a full-pension package or pay-as-you-go). Both meals featured an enormous, varied salad bar and antipasto buffet followed by a three-course meal that offered a few choices for first (pasta) and main courses. There was an emphasis on simple, local food, including the local pasta specialty of buckwheat pasta, cabbage, and potatoes tossed with a mix of several cheeses from the surrounding area.

There are a few other hotels and B&Bs on the pass and some of them also have restaurants open to the public. There are even severalhotels at the top of the tram and funitel, so guests use the lifts to get to and from their accommodation. It seems like it would be a unique experience, although you can’t leave the hotel once the lifts close for the day.

While the ski terrain is a little more limited than some of the Austrian glacier ski areas, I was really glad I checked out Passo dello Stelvio. It was worth the effort to get there and I will certainly be back. I especially enjoyed the convenience of staying right on the pass, and the daily routine of heading out to ski after breakfast, skiing until the lifts closed, grabbing some lunch and changing into summer clothes at the hotel, and then venturing out for a hike on the sunny, south-facing side of the pass. Warm Italian hospitality and excellent food rounded out a great weekend in the mountains.

One thought on “Summer Skiing at Passo dello Stelvio”