Our recent trip to Moldova gave us a chance to explore the country’s complex history and interesting historic sights. From the famous wineries to the Orthodox cave monasteries, we enjoyed visiting some of the most well-known attractions. However, one of the things that intrigued us most about visiting the country was a chance to travel to the unusual region of Transnistria. A breakaway republic currently left in geopolitical limbo, Transnistria’s story reflects that of this interesting borderland region between Europe to the west and Russia to the east.

Officially known as the Pridnestrovian Moldavian Republic (PMR), Transnistria is a self-declared state bordering Ukraine on the Dniester River. In a region where borders have shifted frequently throughout history, Transnistria was originally part of the Moldavian SSR (one of the 15 states in the USSR). This region differed from the rest of the country, however, in having a Russian-speaking population that outnumbered the ethnic Moldovans. As Moldova started to pull away from the USSR and align itself more closely with neighboring Romania in the late 1980’s, the region of Transnistria pulled in the opposite direction and moved to more closely align itself with the USSR.

Moldovan nationalism was on the rise and the government was moving towards banning the Russian language in official business, further fueling fears of marginalization for ethnically Russian residents. On November 2, 1990, the PMR Republic declared its independence, effectively breaking away from the country that would soon become the independent Republic of Moldova. A number of armed conflicts flared up between Transnistria and Moldova which ended in a ceasefire being signed in 1992. Transnistria has existed in limbo ever since—not recognized by any UN member state, they still function as an independent nation in many ways.

We decided to visit Transnistria on a day trip from the city of Chișinău. To make the most of our short time in the region, we arranged a tour with Transnistria Tour, and we were met at the Tiraspol train station by local residents and tour guides Andrey and Victoria. We set off on a whirlwind tour of sights in and around the capital of Tiraspol, and as it was a personalized tour, we were able to ask both Andrey and Victoria questions about the history of their region and learn a great deal more than if we had been exploring on our own. 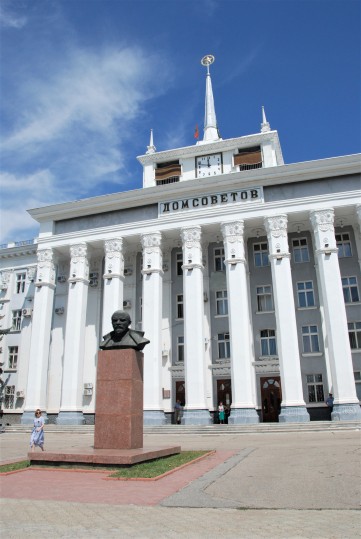 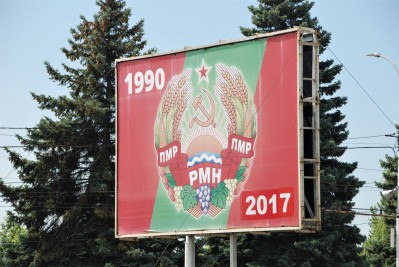 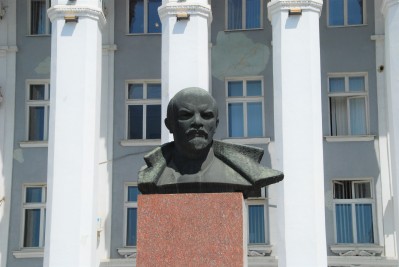 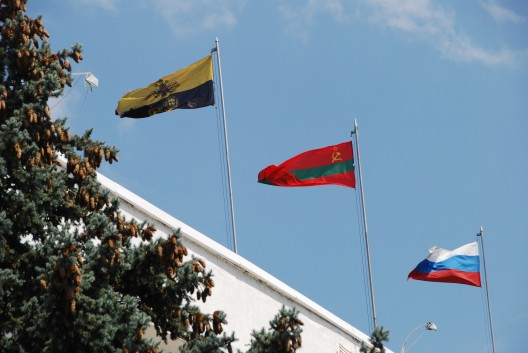 Visiting Transnistria feels a bit like traveling back in time to the days when it was still a part of the USSR. While the country has a capitalist economy and a governing parliament, many symbols and institutions from Soviet times remain which we were eager to see. We visited the House of Soviets, which now serves as Tiraspol’s City Hall as well as the Transnistria Government Building where the country’s Supreme Council meets. Both feature statues of Lenin proudly displayed in front of the buildings, and the House of Soviets is even bedecked with a star at the apex like so many other Soviet buildings from times gone by. Billboards celebrating the country’s independence can be seen downtown, as well as other propaganda signs featuring the old CCCP name and emblem. Transnistria’s flag is the last one in use today that includes the hammer and sickle, and often flies alongside Russia’s flag in a sign of free association with the country.

Monument commemorating the 50 year anniversary of the Bender Uprising

Memorial of Glory in Tiraspol, commemorating the veterans and the dead of the Great Patriotic War (World War II), the Soviet-Afghan War, and the Transnistria War.

A tank on display at Bender’s Memorial Park

Our guides also brought us to several military memorials. In downtown Transnistria, we visited the Memorial of Glory, a multi-part monument commemorating the veterans and the dead of the Great Patriotic War (World War II), the Soviet-Afghan War, and the Transnistria War. In the nearby city of Bender, we also visited Memorial Park, which was set up to honor the victims of the 1992 war fought between Moldova and Transnistria. Both memorials feature a PMR tank on display and other tributes to those lost. We also visited the Bender Uprising Memorial, an obelisk-like memorial commemorating the 50 year anniversary of the Bender Uprising, a 1919 armed uprising by the Bolsheviks against Bessarabia and Romania in the city of Bender.

Aside from checking out the Soviet monuments, we also visited two other prominent historical sites. Noul Neamț Monastery, located in the town of Chiţcani, is a beautiful site with four individual churches. Founded in 1861, it was closed by the Soviets in 1962 but reopened in 1990 and today operates as an all-male Russian Orthodox monastery. You can climb the 70m bell tower for views over the monastery grounds and surrounding village.

The courtyard in Bender Fortress

Busts outside the entrance to Bender Fortress 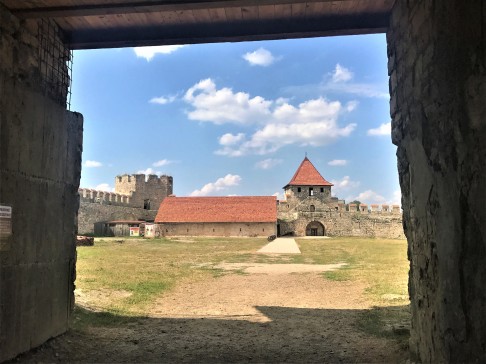 Bender Fortress (also called Bendery Fortress or Tighina Fortress) was one of the highlights of our day in Tiraspol. An Ottoman-era fortress, it was built in the 16th century and features a large courtyard surrounded by thick walls and multiple towers and gates. We visited the small museum on-site and climbed one of the large towers for views of the complex, the Dniestr River, and surrounding countryside.

Transnistria maintains their own border control which we had to cross on the bus. A fairly straightforward experience, although the one of us traveling on a U.S. passport did get a bit of extra scrutiny versus the one on the EU passport. As day visitors there were no additional questions about our itinerary, but in the past there have been regulations on visitors staying more than 10 hours in the region. No visas are required for EU or U.S. citizens, and we were issued entry cards at the border which were checked (but not collected) on our departure from the region.

It’s also possible to travel to Tiraspol by train on the Chișinău to Odessa line. We had hoped to do the trip by rail, but at the time of our visit the train between the two cities was only running on weekends. When traveling to Tiraspol by train, Transnistrian border control takes place right in the train station.

Presentation of the Child Jesus Church in Parcul Kirov

After a day exploring some of Transnistria’s highlights and learning a lot about its history and current status, the question remains: is it a country or not? It’s a complicated question to answer. On the one hand, no United Nations member considers it a sovereign state and Moldova officially considers it an “autonomous territorial unit with special legal status” that remains part of Moldova. On the other hand, Transnistria has many of the characteristics of an independent state: its own flag, currency, military, border controls, and more. If citizens’ self-determination were the only criterion considered, the people of Transnistria have clearly expressed their desire for independence from Moldova and a closer relationship with Russia. The reality of European-Russian politics, however, means that the status quo is unlikely to change anytime soon, and the question of Transnistria’s status as an independent country will remain a difficult one to answer.